The Honey Dewdrops to play on Monday, July 20th 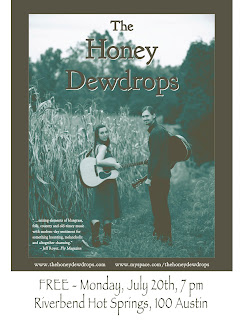 Another installment of Riverbend’s Free Summer Concert Series rolls on as the we host The Honey Dewdrops on Monday, July 20th at 7 PM. “Husband and wife duo, The Honey Dewdrops, mix elements of bluegrass, folk, country and old-timey music with modern-day sentiment for something haunting, melancholic and altogether charming" - Jeff Royer, Fly Magazine.
If the Sun Will Shine, their debut record, was just released May 2009. Recorded live and mixed in a 1920s barn, the record is meant to pay homage to their live performances - full of the same energy and emotion the Honey Dewdrops bring to the stage. The album is a collection of songs that The Honey Dewdrops have written over the past two years and it features material that comes straight from the heart. There are eleven original tunes - some of which are award winners, and a few of the songs got Laura and Kagey plane tickets to St. Paul, Minnesota where they appeared on A Prairie Home Companion's "People in their Twenties Talent Show" (and won first place) in March 2008.
Come join Laura and Kagey for this free show on Riverbend's riverside patio at 7 pm on Monday, July 20th, or come soak in the adjacent public pools and enjoy live music in the hot springs for $10/hr. Donations will be accepted for the performers travel costs.  To hear their music visit http://www.myspace.com/thehoneydewdrops
So far this year, Riverbend has hosted: Raina Rose, Johann Wagner, Harbor Collective, Molly Venter, and Frogs Gone Fishin’. Upcoming scheduled shows include Gabrielle Louise and Martha Reich, both in September. Keep checking the blog for updates.
Posted by Riverbend at 1:43 PM No comments:

This blog is to keep our returning guests, our past workampers, our friends, and our potential customers informed of everything that is happening at Riverbend.

What is most important to you when choosing a hotel/lodge/B&B?

It's all about the view! 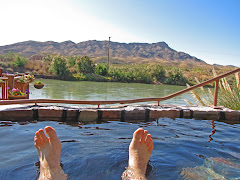 This could be your view right now 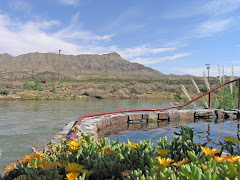